Tales of Old Natalia
• The Black Star of Kingston
• The Wreck and Rise of Whitson Mariner
• Prince Lander and the Dragon War: Tales of Old Natalia 3[1] (in progress)
A Green Ember Story
• The Last Archer
• The First Fowler
• Potter's War (not yet published; currently only featured at events)

The Green Ember series is a succession of middle-grade noblebright fantasy books authored by S. D. Smith, illustrated by Zach Franzen (with maps by Will Smith), and published by Andrew Mackay of Story Warren, LLC.

The series is set in the land of Natalia, where rabbits with swords battle for their freedom against evil characters such as Lord of Prey Morbin Blackhawk and wolf Redeye Garlackson.

As of 2020, the series is composed of four books in the main series which were released in chronological order, The Green Ember, Ember Falls, Ember Rising, and Ember's End; five anthology books that differ from the main storyline, The Black Star of Kingston, The Wreck and Rise of Whitson Mariner, and Prince Lander and the Dragon War[1] (in progress) being prequels to the main Green Ember series, and two others, The Last Archer and The First Fowler (not including the not-yet-published Potter's War, containing happenings during and shortly after the events of The Green Ember).

To date, eight books in The Green Ember series have been published since 2015.

The Green Ember series really began a long while before the publication of the initial book, The Green Ember, when Smith and his children watched rabbits hop around in their front yard in West Virginia. Smith, would, for the amusement of his children, make up stories about how these rabbits had become caught up in these great adventures; and that is how the series was born. Smith decided to turn those stories into books by publishing them via Story Warren, LLC.[3]

Smith says that he wrote The Green Ember to "delight [his] children",[4] who believe it can be summarized in three words: "Rabbits with Swords".[5] He calls the stories he writes "New Stories with an Old Soul", in order to implicate that his "new" stories retain the morality that most of the books known as "classics" do.[4]

Smith recommends the books for middle-grade readers, although he believes the books to be readable by anyone of any age.[6]

The main series (The Green Ember, Ember Falls, Ember Rising, and Ember's End) follows the adventures of rabbit siblings Heather and Picket Longtreader as they find that their world is at war and join the fight for good against overwhelming odds.

The prequel series Tales of Old Natalia (The Black Star of Kingston, The Wreck and Rise of Whitson Mariner, and Prince Lander and the Dragon War[1]) is set a century before the happenings of the main series, and accounts the tales of characters such as King Whitson Mariner, Lord Fleck Blackstar, and Prince Lander as they battle struggle, betrayal, dragons, and evil from on high in their newly discovered land of Natalia.

The A Green Ember Story anthology books (The Last Archer, Potter's War, and The First Fowler) tell of the lives and backstories of various side characters of the main series such as archer Jo Shanks and Eefaw Potter, and are written from their perspectives.

S. D. Smith recommends that the whole series be read in the following order (main series books are in bold):[7]

"Heather and Picket are extraordinary rabbits with ordinary lives until calamitous events overtake them, spilling them into a cauldron of misadventures. They discover that their own story is bound up in the tumult threatening to overwhelm the wider world.

Kings fall and kingdoms totter. Tyrants ascend and terrors threaten. Betrayal beckons, and loyalty is a broken road with peril around every bend.

Where will Heather and Picket land? How will they make their stand?"[8]

"The stage is set. It's war. Morbin Blackhawk, slaver and tyrant, threatens to destroy the rabbit resistance forever. Heather and Picket are two young rabbits improbably thrust into pivotal roles. The fragile alliance forged around the young heir seems certain to fail. Can Heather and Picket help rescue the cause from a certain, sudden defeat?

My Place Beside You

My Blood For Yours

"A harrowing adventure inside enemy territory. Heather and Picket are plunged into the darkness of Morbin’s shadow, fighting to bear the flame of the cause and light the way for rabbitkind’s upright insurrection.

Hope for a Healing

Work for the Mending

Fight for the Rising"[8]

""The end is here. Heather and Picket face off for the last time with their tyrannical foes in this final installment of the main Green Ember Series. The Mended Wood flickers dimly in the vision of the rabbits of Natalia, as they battle bravely for their survival and a hopeful future beyond.

My place beside you,

my blood for yours,

The Green Ember series was positively received by readers, and has enjoyed particular popularity with Christians and homeschooling families. The publication of each of the three initial main series books was aided through Kickstarter projects, with each book receiving more backing than the last: $21.9K for The Green Ember,[10] $55.5K for Ember Falls,[11] and $81.4K for Ember Rising.[12] Ember's End is the only main series book to date that has not been funded via Kickstarter.

The series has featured prominently in many of Amazon's Bestsellers Lists, including Christian Fantasy,[13] Children's Christian Action & Adventure Fiction,[14] Religious Science Fiction & Fantasy,[15] and Children's American Folk Tales & Myths.[16] The Green Ember has been nominated for multiple awards, including World Magazine's Children's Book of the Year 2015,[17] and the West Virginia Fiction Award.

As of June 2019, the series (including the prequels and anthology books) has an average rating of 4.46/5 on the book review website Goodreads, based on 10,419 total user ratings and reviews, and a 4.87/5 average rating on Amazon based on 2,855 user reviews.

S. D. Smith initially feared that the first 1,500 copies printed wouldn't sell. As of 2020, over half a million copies of the series have sold since 2015 after passing the 500,000 mark sometime in 2019. The Green Ember series has virtually never been out of print since the first book's publication.[18]

While the books are available directly from Story Warren, LLC in the U. S., in Canada, they are distributed by Classical Education Books. In Australia, they are available through The Wandering Bookseller.[19]

Regarding possibly shipping products from Smith's store to Canada, Smith says that's something "we're working on." The reason they are unable to do so currently is because of high shipping costs.[20]

Regarding the series' future, S. D. Smith said the following:

Smith is currently working on the sequel to The First Fowler.[20]

In response to an interview question regarding a possible future TV/movie adaptation of The Green Ember, Smith said:

He says he would prefer computer animation as the medium to creating a potential series, in contrast to CGI live-action and traditional animation.[23] 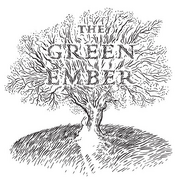 An illustration promoting The Green Ember series, found on the last page of Ember's End, on the backside of Ember Rising's cover, and on promotional merchandise including t-shirts.
Add a photo to this gallery

Retrieved from "https://thegreenember.fandom.com/wiki/The_Green_Ember_series?oldid=12889"
Community content is available under CC-BY-SA unless otherwise noted.