Samuel Dale "S. D." Smith is the bestselling author of The Green Ember series, a succession of middle-grade fantasy-adventure novels.

"S. D. Smith is the best husband Gina Smith has so far had and father to four Smithereens who are still young enough to appreciate what passes for his wit and wisdom. Sam is a West Virginia native, a sometime sojourner in southern Africa and the Caribbean, and current resident of his house.

Sam is an award-losing author, having featured as a runner-up for the West Virginia Fiction Award, World Magazine’s Children’s Book of the Year, and Audible’s Kids Audiobook of the Year. He has also lost every other literary award ever given over the entire course of human history.

Sam is a co-founder of Story Warren, a site for parents and others who love children and want to be “allies in imagination.”

Sam has spoken at conferences and classrooms across the country, occasionally doing what disgraced former experts have called, “a pretty decent job.”

S. D. Smith was born in Huntington, West Virginia, on February 11, 1977. He was also raised in the aforementioned state for a period of time in his childhood, but has also spent some of his young years in Ohio, KwaZulu-Natal and Gauteng (South Africa; as a missionary kid) and briefly in Puerto Rico and Zimbabwe.

As a child, Smith's mother read him The Chronicles of Narnia.[2][3] When he was age 12, his family moved to South Africa, where his father worked as a church planter. When he was older, he moved back to Beckley, West Virginia, earning a living as an adult educator.[2] West Virginia's "wild landscape" amid the Appalachian Mountains provided inspiration for his imagination as a child.[4]

Eventually, he began to tell stories to his children of rabbits and bravery. Years later, he was encouraged by his family to write the stories down, which resulted in The Green Ember series.[2]

In 2015, Smith published his first book, The Green Ember, with an initial print run of 1,500 copies,[5] by way of Story Warren, LLC, which he co-founded with Andrew Mackay.[2] The funding for the publication of the book was raised in part through an initial Kickstarter fund, which raised $21,908 with the help of 577 backers.[6] Encouraged by the apparent positive reception the book received, Smith proceeded to write and publish in July 2015 his first book in his prequel series Tales of Old Natalia, The Black Star of Kingston. Smith then raised $55,508[7] by way of another Kickstarter fund and self-published his sequel to The Green Ember, Ember Falls.[3][4] The anthology book The Last Archer in his A Green Ember Story series was published in December 2017, with the Ember Falls sequel Ember Rising following in March 2018; like the two previous main series books, its publication was also aided financially through a Kickstarter fund, which raised $81,448 with the help of 1,971 backers. In December 2018, Smith published his second book in Tales of Old Natalia, called The Wreck and Rise of Whitson Mariner. The following year saw the release of The First Fowler (a direct sequel to The Last Archer) and the announcement of the fourth and final main series installment: Ember's End.

Smith's The Green Ember was nominated for multiple awards, including World Magazine’s Children's Book of the Year.[8][9] His books and audiobooks have held prestigious places on multiple bestselling charts, and he was featured in Amazon.com's Top 100 Bestselling Authors list for a period of time.[3]

He currently lives in Grandview, West Virginia, with his wife and children, where he enjoys spending time with his family, writing, and reading the works of authors that include G. K. Chesterton, C. S. Lewis, and J. R. R. Tolkien.[10] He is a devout Christian and currently attends church in the Grandview area.

He is the co-founder of Story Warren, LLC, which is the company that publishes his books.[11]

Much to his surprise, The Green Ember series has proved to be rather popular, as he has sold hundreds of thousands of books and has been listed as one of the Top 100 Bestselling Authors on Amazon and The Green Ember's audiobook has spent time as #1 in worldwide sales on Audible, even briefly surpassing the popular Harry Potter series.[11][3] On account of the extremely positive reception to his books, in 2017, he decided to quit his day job and work as a writer full-time.[12]

Smith has spoken to filmmakers about possibly creating a movie adaptation of The Green Ember, a possibility about which he has said:

In an interview posted by New Seddleton Official on their YouTube channel, Smith said the following about a possible TV/film adaptation of The Green Ember:

In the same interview, on possible future writing projects he may be pursuing, he said:

He says he hopes to share the low fantasy story in the "next few years[.]"

Smith believes it's very important to maintain discipline in writing. "Don't wait for perfection," he says, "you don't have to be perfect. Show up, do the work. . . . that's the way to be[come] good." He suggests writers shouldn't try becoming "the next Harry Potter," and that starting out with a small audience for one's writing is ideal, because it serves the specialized needs of a few people better than a general story would for a larger audience.

He subscribes to Jack London's theory on inspiration: "You can't wait for inspiration. You have to go after it with a club." He links not waiting for inspiration to what he believes about doing the work of writing rather than waiting for perfection. "[I]nstead of passion or inspiration, I would adopt the word determination, because determination is about decisions[.]" He believes inspiration comes when one determines to write—even if what one writes isn't perfect—and that inspiration and passion often follows. "Not always, but . . . that's sort of like the truism that you'll hear from almost every writer, every kind of creative person[.] . . . Show up, and just do the work, and you're brave in that way."

S. D. Smith opines that young writers should focus on getting good at writing, rather than getting published immediately. Smith believes that the primary purpose of writing is to bless others, and calls writing a "vocation," equating it with other careers insofar as they are all meant to benefit someone else.[13] 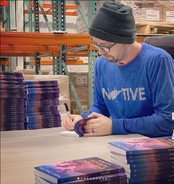 A photo of S. D. Smith.
Add a photo to this gallery

Retrieved from "https://thegreenember.fandom.com/wiki/S._D._Smith?oldid=12564"
Community content is available under CC-BY-SA unless otherwise noted.