The Wreck and Rise of Whitson Mariner
Ember's End

Dragons are a species of predatory reptile known to have inhabited Natalia in the time of King Whitson Mariner, before nearly making a resurgence in the time of Smalden Joveson.

The Wreck and Rise of Whitson Mariner

Some time after the Battle of Ayman Lake, Lord Grimble and Captain Grimble encounter the dragons on an island to the west of Ayman Lake they inhabit. Prior to this meeting, the dragons had enslaved a local population of rabbits, whom they used as a food source. The two villainous parties strike an alliance, with the Grimbles promising the dragons a new group of slaves in the form of King Whitson and the crew and passengers of Vanguard.

During the wreck of Vanguard, the dragons come silently and secretly aboard ship and captured Queen Lillie in the service of Lord Grimble, taking her away deep into the forest. 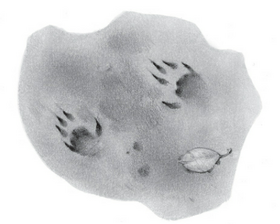 Massie and Lander track them down and come upon Galt, who has been living on the island in exile for months. Galt knows of the dragons, and directs the pair to where the dragons are surely holding Lillie captive.

He tells them all he had come to know of the dragons since he came to live on the island, which the dragons have inhabited long before his coming. They would occasionally congregate during the night at a sacred pool of theirs, where they would chant dark, ominous songs, in an evil ritual. In the middle of the pool, upon a raft, they would tie up a rabbit, and after their dark chant was done, they would hurl themselves viciously upon the poor creature as a part of their ritual. 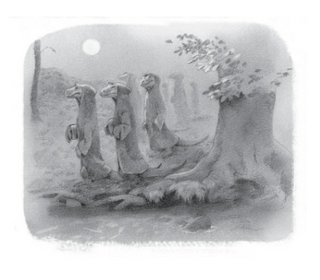 Queen Lillie also has a close-up encounter with a dragon while she was captive in a hut deep in the forest on the island. She wakes from an unconscious stupor, and is attempting to free herself from the bonds with which her hands were tied, when a dragon enters the hut, stopping her from freeing herself.

Later, Lander, Galt and Massie make it to the hut where the dragon and three of Grimble's bucks stand guard over Lillie. Lander manages to get on the raft in the middle of the pool, covering himself with a cloak and feigning unconsciousness. The only dragon present, the one Lillie had encountered earlier, wades into the pool, thinking to kill Lander; but when he gets close enough, Lander suddenly lashes out with his sword which he had hidden. By driving his weapon deep into the monster's soft underbelly, Lander kills him instantly.

It isn't long before another score of dragons arrive and, seeing their dead comrade in their desecrated sacred pool, they immediately find and chase Lillie, Galt, Lander, and Massie. Lander bravely leads many of the dragons into a cave, to distract them from pursuing his mother, Galt and Massie.

Lillie, Galt, and Massie flee towards the riverside cliffs, a group of dragons hard on their heels. King Whitson Mariner and his crew aboard Steadfast are there, on their way to attack Grimble and his Desolation. Lillie, Massie, and Galt manage to jump desperately from the cliffside onto Steadfast's mainmast, thus saving themselves from the dragons. Whitson orders his archers to fire upon the dragons, but the arrows all fail to slay them except when they strike their soft, scaleless bellies.

Later, Whitson is approached by Mother Saramack, who tells him that one of Grimble's bucks has brought a message from the dragons. The message states that the dragons intend to report to their king of the trouble, and that they will return to finish off the rest of the rabbits.

Prince Lander and the Dragon War

Having defeated the dragons, Lander resolves to bury their eggs within a mountain along with the Stone Sword of Flint. When Massie notes that the relics might be discovered, Lander proposes that they dam a nearby river to turn the mountain into an island. He further proclaims that the rabbits will insure that knowledge of their enemy will be lost, unless it should become necessary for one of his heirs to contend with the foe.

The Tomb of Lander's Dragons is mentioned in passing by Emma.

The Tomb of Lander's Dragons-and more particularly the dragon seeds-is mentioned by Captain Frye, as he speaks to Picket on the latter's plan to lead the Fowlers on a rescue mission to liberate his family.

Later, Heather has a nightmare in which she falls into a dark hole, amidst countless large, dark eggs. A cruel, scaly hand reaches toward her out of the darkness just as the dream ends.

Heather dreams a dream similar to one she had experienced before, as she sleeps restlessly in the Akolan prison, within the Sixth District: wherein she falls into a dark place among many large dragon eggs. An evil voice tells her that they will awaken, and a scaly hand reaches out to her from the darkness.

Having been consigned to the depths of the dragon tomb by Morbin Blackhawk and Garten Longtreader, Smalden Joveson and Heather Longtreader encounter a live dragon. He introduces himself as the dragon keeper, and explains that he is the successor of the only hatched dragon to survive the final battle with Lander's followers. Lander made a treaty with that dragon, who agreed to watch over the eggs of his kind, only allowing one to hatch when his time of death drew near. This tradition, along with that of a meeting between the keepers and the rabbit monarchs of Natalia, has continued until the present.

The keeper, however, reports that he has never met with any king of rabbits, leading Smalls to suspect that his father King Jupiter must have been the last to do so. After noting that he has helped keep Smalls alive before Heather arrived with the Firstflower infusion that saved them both from mortal wounds, he asks for Smalls' help. As he reports, the tunnels of the tomb have become unstable, and he has been working to insure that they do not collapse and destroy all the eggs. It isn't long, however, before Heather discovers that the keeper has been lying, and that he is not the dragon keeper at all, but the dragon prince.

Having killed the last keeper after awaking of his own volition, the prince admits to causing many of the other eggs to hatch, giving him an army of thousands of dragons. Discovering a means to dig into an ancient vault built in Lander's time, the dragons are prepared to break free and rampage across Natalia. However, having already made his way into the vault, Smalls emerges with the starsword, which he uses to kill the prince. Realizing that they cannot escape through the vault exit without leaving the remaining dragons free to do the same, he and Heather arm themselves and set about destroying the dragons and their tomb.

Dragons were four-legged carnivorous creatures, with five razor-sharp claws at the end of each leg. They were lithe, scaly, and muscular, capable of standing upright. Their scales provided impenetrable protection from arrows, but their vulnerability lay in their soft underbellies, which lacked this protection.

Though somewhat primitive, dragons were known to be of consistently vicious demeanors. Usually found in groups, or tribes, they were fiercely loyal to their own kind, and would stop at nothing to take revenge on anyone who defied them. They often partook in dark rites, which consisted of chanting, singing, and carrying torches.

Dragons considered rabbits to be nothing more than prey or sources of amusement, having no regard for their status as thinking, speaking beings. Heather, through her gifts as a seer, deduced that they would make a treaty with the Lords of Prey rather than fighting with them over their common food source. She further suspected that dragons had done this throughout Natalia's history, making it impossible to look to them as even unwitting allies against Morbin's forces.

Retrieved from "https://thegreenember.fandom.com/wiki/Dragons?oldid=15933"
Community content is available under CC-BY-SA unless otherwise noted.