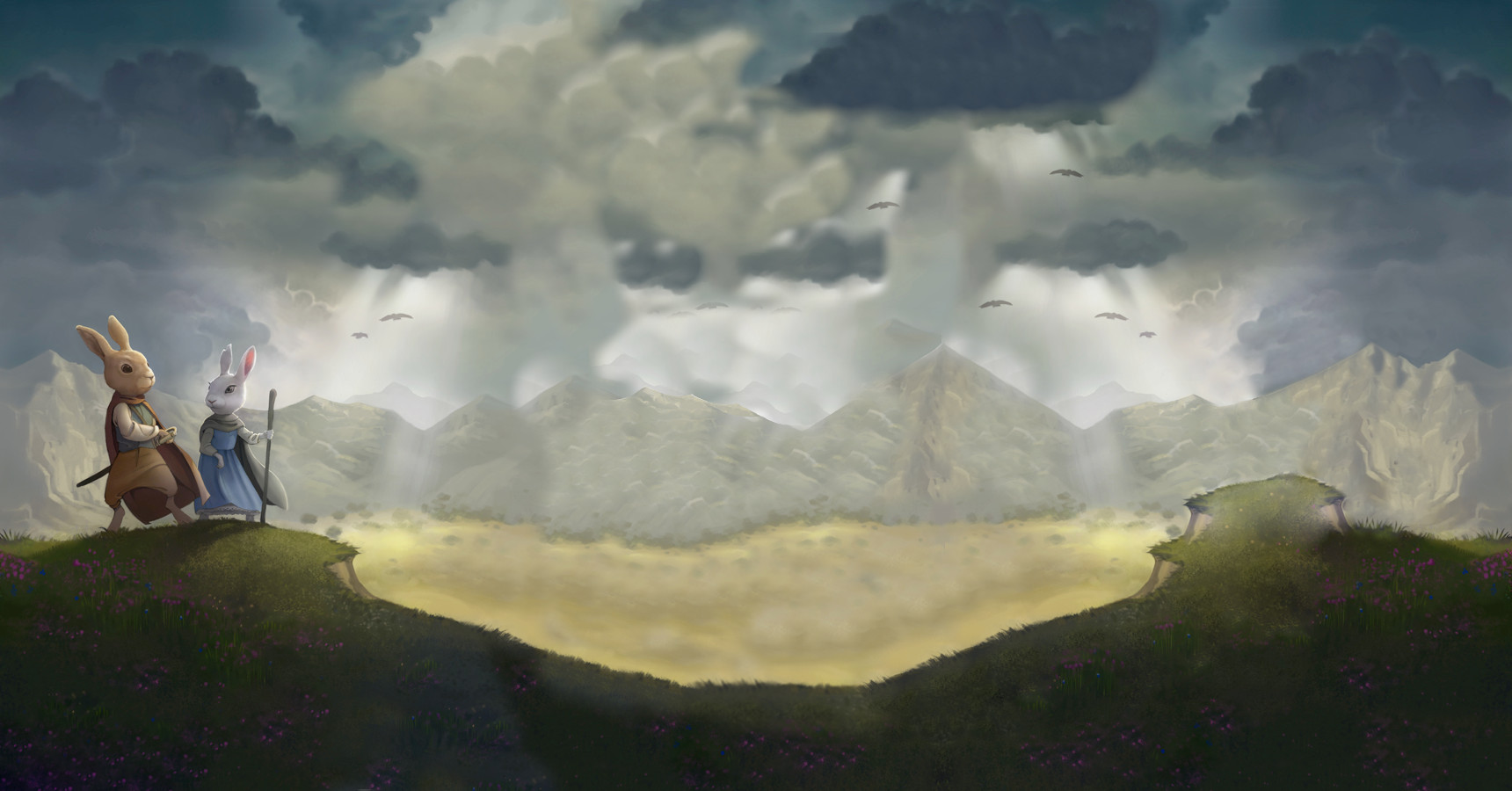 I believe we've used chat once or twice to discuss certain subjects because it doesn't keep any records. It's been quite a while since we've made use of it though.

@CybermanHorsecollar I think the idea is that one of the requirements for a good article should be a minimum word count. Obviously there will be a number of articles that are too short to qualify since we know so little about their subjects.

Sounds okay; I’ve never really implemented a system like this.

So, with the whole relationships section, did we want to include antagonistic relationships? I mean, I don't imagine we'd include it for most if not all of the predators-Picket and Smalls only encountered Morbin, Redeye, and various others once or twice, Whitson and Lander will probably only confront the dragon king once, and so on. But there are some traitor rabbits who seem like they have more potential: Helmer and Daggler have history, Heather had several encounters with Bleston, and then of course there was Picket's tragic friendship with Perkinson. Think they're worth bringing up?

@J.S. Clingman @Pinkpeony73 So I know that some time ago-so long ago that I can't remember where we talked about it-we decided to use present tense wherever possible on articles. However, in terms of the biography sections, this presents a bit of a problem due to something we've been doing up until now. Namely, the fact that some characters have sections detailing their history before the events of certain books.

Do y'all think we should retain these sections? Or should we redistribute the information from such areas under the sections for books in which each bit of history was revealed? For example, Helmer's history with Airen, Snoden, and Hewson would appear under Ember Rising, while the King's Arm stuff would go under Ember's End.

The Green Ember series
A reply to Kilmarnock228
2

Yep; he sent out an email about it as well some time back. You can subscribe for his newsletters at the link below; currently signing up also gets you the audiobook version of The Green Ember for free.

A reply to Avila Joy
0

@CybermanHorsecollar yeah, that was what I meant. I guess I find it hard to use the word show, because it's naturally a shortening of "television show", and most of those are available on any number of devices besides television.

A reply to Avila Joy
1

Well, in his latest Q&A, S.D. Smith has stated a preference for a series over a movie, and that there would be some changes while endeavoring to retain the heart of the story. He said he doesn’t want to see the book recreated exactly, in part because he has grown as a storyteller since writing it.

The ayes have it!

No problem J.S.! I'll see about adding some of the trivia we got to the various articles. EDIT: By the by, are you going to update the Featured Media today?

Yeah, it’s pretty awesome. Of course, I feel like I could probably spend a whole hour or more with him just with my own questions...

Just in case y’all missed this info over on New Seddleton:

The Green Ember series
A reply to Pinkpeony73
2 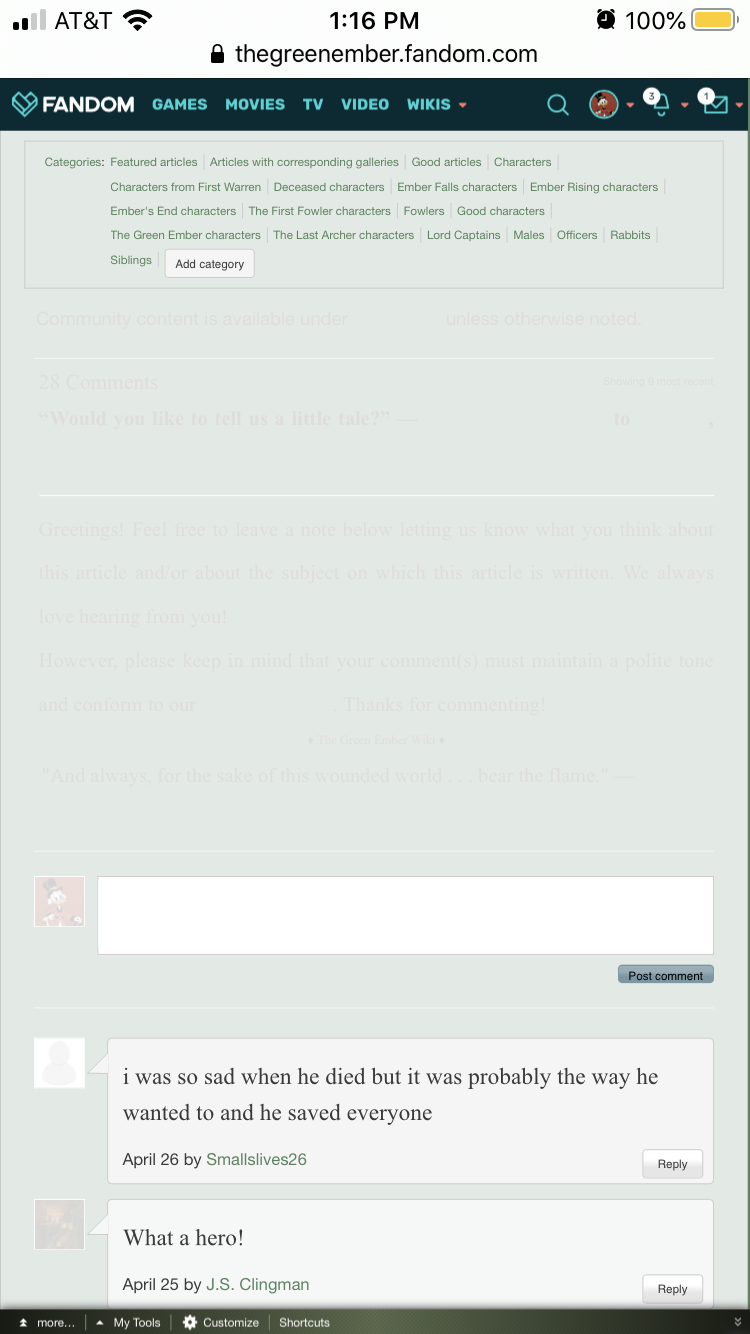 No, the community-corner is the one I was referring to. If you use the desktop version of the site, the text is barely visible for some reason.

So with our decision to include categories on character pages based on where they're from, one issue has come up. There are certain characters without specified points of origin-most notably, the various wolves and dragons. Some of the rabbits also have some unclear origin points, such as the adult Longtreaders. Should we stick Garten in with "Characters from the High Bleaks"? And what about various other characters?

The Green Ember series
A reply to Pinkpeony73
1

Just noticed something. Our "MediaWiki:Community-corner" doesn't show up well with the new coloration.

That might be a good idea; I think articles below a certain wordcount are automatically considered stubs under Wikia/Fandom definitions, even if they don't have a stub template included in them or aren't in any category for it. There's quite a few subjects that, sadly, we just have very little information about.

That awkward moment when I realize I proposed this action some two months ago, it was approved, and I promptly did NOTHING about it.